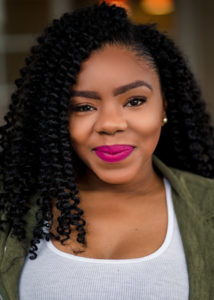 Training with some of Atlanta’s best teachers such as Nick Conti Professional Actors Studio, Dwyane Boyd’s Premiere Actors Network, Alex Collins over at Drama Inc, and with Robert Mello at The Robert Mello Studio just to name a few. She’s worked on HBO Bessie with Queen Latifah in 2014. Briana was brought to Evolution Talent Agency In 2016 by her manager Gail Tassell. They love working with Beth and the entire Evolution. The team over at Evolution really sees her and understands her level of talent and where she wants to take her career. Since being with Evolution she has had auditions for top of show guest star roles and series regular roles. She will go out of state to audition and work. This year has been a major step for her in her career booking 3 projects back to back, 2 for Netflix, Holidate and Teenage Bounty Hunter. As well as BET new streaming app BET+ show called Bigger. She is really excited to work with a team that pushes her, wants the best for her, believes in her talent and her as a person.