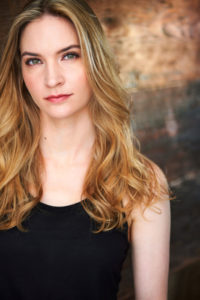 Charity Hitchcock is an award winning actor and singer from Dallas, Georgia. Evolution saw her talent and drive as a force to be reckoned with and signed her in 2015. Growing up in a small town, somewhere between having everything and having nothing, she’s sought out and worked closely with some of the best instructors in the business including renowned acting coach Sara Mornell.

You might know her from her role on season 3 of Star (FOX) where she plays Jennifer, the wife of Chad Michael Murray. Having seen her first success in a film directed by Tommy Ford, Charity has now worked on other hit shows including What Would You Do? (ABC) and the quick-witted comedy Brockmire (IFC) starring Hank Azaria. Look for her next supporting role as the lovely Dorothy O’Conner in the Hallmark Channel’s Christmas Love Letter to be released December 2019.

Passionate about giving back, she has dedicated time volunteering overseas and currently works locally with the organization Friends of Refugees. Charity is a star on the rise, and Evolution is delighted to be a part of her journey.