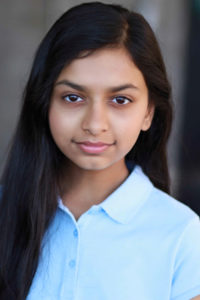 When Jia Patel auditioned for Evolution Talent Agency at the age of 6, little did she know the impact this would have on her passion for acting. With much guidance, support, and effort from the entire Evolution Team, Jia started booking projects starting with her third audition. She was booked for 11 days on the film “Ivide” as a supporting actress. Her love for acting skyrocketed immediately from there. After that she booked a SAG national commercial and national print ad for Home Depot, a SAG commercial for Geico, and a regional commercial for Atrium Health. She booked a video ad and online project for Novel Research Park and with the help of Evolution Talent was able to enjoy working side-by-side with her mother on this project. Jia also booked a featured role on the film “India Sweets and Spices.”

She was thrilled to be invited to the Sundance Film Festival in January 2019 where she was interviewed and walked the carpet for the movie premiere for “Late Night.” Jia had a featured role in this film that shot in NYC and she had scenes alongside actress Mindy Kaling.